This woman well, Is an artist. Yes, it’s a little odd for an artist to be the person in the art but that was her style. Let me make a metaphor. When you watch a commercial for a sports car drifting a corner at high speed. The slow motion slots of smoke pouring from the tires and sun reflecting off the hood, that is the ad for the car company itself. But, There’s a driver also, and you never saw the drivers name. That car was pushed and controlled at that limit by the driver and not the car. Her painter was Édouard Manet.

She was also a painter. She was born in 1844 in France. She was the model in the well known masterpieces of Manet. It is interesting that modeling was a thing back then. As a young woman she was depicted in his art and became famous. She has had her personal art and art of her featured in exhibits. She was painted many.many times. If you google her name you can see her painted doing almost anything. That is what I find interesting. A lot of credit of her paintings were given to her even though she was the subject. I feel like she gave off a feeling that the artist couldn’t give alone. This combination is what made these works famous.

As one of the other students in my class mentioned. Nudes were always gods and goddesses. She didn’t seem to care about that. Many nudes are drawn of her and in all her paintings you see her confidence in who she is. She’s not a goddess but was as good as one. I read a report by someone who mentioned that when the first painting of her was on exhibit it was laughed at or ignored because she was nude and then visited later; people at the time didn’t want to admit that it was art. I also agree with the similarities between titanic and the nude of her laying on the bed.

Look what i drew while I was procrastinating homework. It took like 3 whole sharpies. I find it important to have more than one thing going on at the same time. As a person with ADD its really hard for me to just do something. right now I’m writing this, re-watching doctor who, looking at computer parts and drawing my villain picture. I like completing things, I love it. I honestly, and i hate it but have come to terms with it, forget sentences while I’m saying them. Working on a bunch of things at once gives me the ability to hop back and forth and finish things.

I couldn’t exactly figure out where I was going with this. so, i decided to drown the cardboard as much as possible hahah

I’ve never used spray paint to paint pictures before. I’ve only ever used it to paint things that needed to be painted. This is new to me. It was almost difficult to purposely make the paint run and stay wet. I enjoyed it though. I should have went to Venice.

I definitely need more space, I was thinking about redoing this on my computer and putting it on a wall somewhere famous with google earth hahahha.

In other news I had a piece of cardboard that was bigger and i taped it to my wall to paint on it. I left for a bit to get food and came back and it was gone. I’m assuming it flew off of my balcony. I live on a 3rd floor apartment so someone downstairs got a free piece of cardboard i suppose… 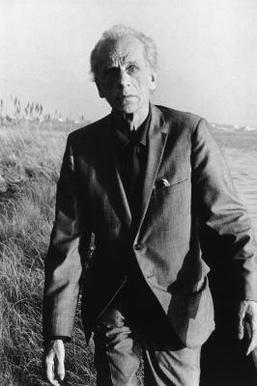 This man is Joseph Cornell. He grew up in New York taking care of his brother in a small house. I enjoyed this class lecture. As said in the video he is a self trained artist who made his art in boxes. These boxes were an “adventure” in a box; each one specifically made with a theme and design.

After doing further research of him i have found that he is an interesting person. He lived in a quaint little house devoting his life to take care of his brother. His brother had Cerebral Palsy so he was home most of the time, and weary of strangers he was always alone. Even though he was alone I feel like his mind was exploding with ideas for his art. I feel like living in his little house is what inspired him to make these boxes. He found art in thing people might not even consider art and he turned it into an experience.

This art, locked behind glass, was his way of giving us an experience. The story told to us about his neighbor that used to borrow these boxes from him is the best example. I would have loved to have handled one of these with absolute care. I really enjoy art that has a physical essence to it;something you can enjoy with more than just your eyes.

In the meantime, I’m catching up on the 4th season of Torchwood. I’ve been out of town lately because of a wedding and I’m finally at a house with internet so that’s cool.  I enjoyed being out of wifi and cell service the last week. It felt great to be off the grid.

So this weeks activity is was to make a chair in 3D. I’m not allowed to use my old sac state ID to log onto their server and use solid works, so I’m super glad I can use Minecraft for this. I’m obviously not very good with Minecraft however lol.

this is what my main inspiration :

Oddly, curves are really weird with cubes. hahah.
This was interesting for me. ususally when I used to play minecraft with my friends I was just trying to survive but building certain objects was fun. I think I might get back into minecraft.

Here’s some more views of my chair. I made it all out of cotton so I feel like it’s really comfortable. I put it it in the middle of the water pointing west so you can watch the sunset over my minecraft world.

And this is my squid Steve who hung out with me as I built him a cotton chair.

So I’m editing an decided to stop cutting stuff out. It’s down to 4:53.

If I didn’t have two monitors I’d cry. I run Premiere on both or After Effects on one with YouTube on the other. Having 12 logical cores on this comp doesn’t slow me down at all. I also feel like I’m out of anime’s I need new ones.

Here’s a preview of the coloring I’m doing, due tomorrow. And also enjoying some System of a Down lol.

In other news, I was at a party last night and tried to light a stoge on the stove for this lady, didn’t have a lighter and I almost burned my eyebrows off. Don’t play with fire when you’re drunk kids. :)

EDIT: here’s an extremely large gif of steph stealing someones money and picking her weapon back up.